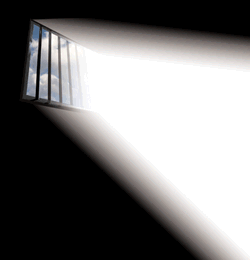 Reaching Out in the Media:

Reaching Out is an organization under the leadership of the Lubavitcher Rebbe. We are on the forefront in bringing the light of the Torah to the darkest places of the prisons. It is why we are called the Chabad House for Jewish Prisoners. Chabad Lubavitch is known for its love to all Jews, and the Lubavitcher Rebbe never recognized labels for Jews, but loved all. Reaching Out helps all Jews in confinement; regardless of a person's religious observances, affiliation, background or lack of one, we help all. We also help non-Jews to follow the universal Seven Noahide Laws (code of ethics and morality) that are applicable to all of mankind. We help Jews and non-Jews that reach out to us for help, regardless of race, creed, sex, color or religion. Every request is dealt with. We do not charge a cent for our work. People can give donations, as we are tax deductible, if they want to, but it is not a condition to our helping them.

Everyone knows that a stick cannot push away darkness but the teachings of the Torah, the prayers that Jews in prison recite daily, the kosher food that the Jewish prisoners struggle for, the ability to light Shabbos candles, and all the other mitzvahs, are the light that pushes away the darkness in prison. The basic Lubavitch philosophy is, darkness can be changed into light.

Jews in prisons face many challenges maintaining their Jewishness. Reaching Out has distributed, thanks to a grant from the Yonina Memorial Fund, thousands of large print annotated Prayer Books. Most people are not aware of the plight that the thousands of Jews in prisons across America, in county, city, state or federal, suffer daily. The prison system makes it very difficult to maintain one's sanity and even more difficult to observe one's religion properly. Even in the most accommodating prisons, it is not simple to live as a Jew. Jews in prisons are alone and afraid, and many think that they have no one to turn to and that no one cares. The Rebbe cares and helps the Jewish inmates with any and all religious problems that have not been addressed properly by the prison staff. We send free books in order to help each on their path to learn about our rich Jewish heritage and rehabilitation. We help each to observe Jewish holidays and assist each with their daily Jewish practices, which is a great challenge especially in such isolated and anti-Semitic environments, where Jews, are thank G-d, a very small minority.

In addition, we are now in touch also with English speaking prisoners in England, Germany, South Africa, New Zealand and Australia. The monthly "Reaching Out," which we send free, is in its 25th year of uninterrupted monthly mailings. It is the oldest, most popular monthly, read by Jewish inmates everywhere. In fact, before Reaching Out started its monthly, Jews in prisons were not being provided any Jewish literature. Some Jews in prisons have no family, some have families that want nothing to do with them. Each month they wait eagerly for our monthly mailings and for some, it is the only mail from the outside world.

In each Jew there is a spark (in Hebrew, neshomo, in English, soul). Sometimes this spark is dim. It is why the Rebbe sends emissaries out all over the world,and it is why our monthly Reaching Out is sent to those behind bars, to "undim" that spark, to fan it into a flame in each and every Jew. The teachings of the Torah help a person become a healthy minded individual who knows that he or she has a vital part to play in the universe even from the confines of a prison cell. This is also a preparation for eventual re-entry into society.

As mentioned, prison is a lonely and frightening place. Prisons generally tend to dehumanize inmates and destroy the family unit, as well as any self worth. Our goal is not only to help free the inmate from prison physically, but to free him or her spiritually. Inmates are cut off from their families and their communities.They are isolated and vulnerable to anti-Semitism and overt proselytizing. Even the strongest personalities can lose their identity and ability to cope. Some have no one to discuss hate, medical problems or misunderstandings and turn to us for help.

In addition to sending out a monthly to thousands of Jewish prisoners in the USA and abroad, we also send out books, Jewish literature and religious items. We send teachers to individuals or groups, (partially paid for in loving memory of Esther Rivka bat Yaakov Meir), all geared toward helping each prisoner to become rehabilitated, not only for whatever it is that landed them into prison, but more so, to become closer to G-d and knowledgeable in their spiritual awakening.

Reaching Out corresponds with hundreds of men and women in prisons and we make ourselves available in all their spiritual needs. We go to bat for kosher food in so many states that it would take up too much space to mention all of them. We help the men who need to fight for religious freedom. We send literature in Hebrew or Russian to those that do not understand English. In many state, and county prisons, where they have no budget for religious items, we donate all important religious items.

In addition to being in touch with individuals, we are also very involved in helping to make policy changes in all states (statewide) and also on the federal level, so that Jews in prisons can better practice and observe their religious rights.

It was Reaching Out that negotiated the first statewide kosher food program in the United States, in NY State Dept of Corrections back in 1991. Before this,there was only one facility in the entire state of New York that provided kosher. Since NY State expanded and allowed all prisons to serve kosher, many other states have followed suit afterwards. (See video).

After many years of negotiations, the Director of the Federal Bureau of Prisons agreed to implement hot kosher lunches and suppers, each day and every day of the week, throughout the US, in all its prisons. Before our involvement, the Federal Bureau of Prisons was only serving three hot meals a week to all the federal prisoners. We were instrumental in helping the federal prisons implement two Passover Seder nights instead of only one and to implement a nationwide guide for allowing the Sukkah in all prisons (including closed buildings that never had a Sukkah) and other important mitzvahs.

Reaching Out has many accomplishments over the years. New Jersey State had their first Sukkah set up in a prison thanks to our efforts and Virginia State has agreed to allow Jewish inmates to wear the Tefillin and Tzitzit for the first time. Texas State set up eight kosher facilities and New Hampshire State agreed to provide kosher for the few Jewish inmates. California State has agreed to serve kosher in all their facilities, statewide, and to hire Jewish chaplains in many of its prisons.

It is interesting that although Chabad Lubavitch has full-time representation in forty-six states, Reaching Out has helped a Jewish woman obtain her kosher food in the State of Montana before Chabad-Lubavitch opened an office there.

In addition, the Rebbe also instructed us to help the families left home, wives, parents, children, in their daily struggles to maintain a normal lifestyle while a loved one is in prison. We are now expanding our "Lend a Shoulder" program and actively seeking professionals who would give of their time to adopt a family outside of the prison walls.

The Reaching Out staff consist of professional dedicated individuals, who are in touch with elected individuals on both sides of the aisle, in order to make sure that religious needs in prisons all over the US are met. We pride ourselves to be called the Chabad House for Jewish prisoners and act as the "inmate's representatives". We also have contacts with high officials in Homeland Security and help those transferred to facilities on their way home, to make sure that they receive kosher food and other religious needs too.

Jews in need seek us out from all over the world and from all walks of life and no one is turned down. Like in over 4,000 Chabad Houses all over the world, what unites all of us is that each cares dearly for another Jew and each will do whatever it takes to bring the Jew their needs. This is the teaching of the Rebbe and this is what we do. The Rebbe opens the doors for us to be able to help a Jew in need. Rich and poor are treated the same.

We live today in a time which the Lubavitcher Rebbe calls the last moments of exile, that our generation will be the last in exile and also the first in Redemption and we can see it openly. Non-Jewish commissioners, directors, governors and senators and heads of prisons are ready and willing to do what they can, if approached properly, for the benefit of religious rights.

It is clear that this is just part of the amalgam the Rebbe has forged to help every Jew in every corner of the globe. If it is a Jew in Shanghai, China, Tel Aviv, Israel, Melbourne, Australia, or Sao Paula, Brazil; if it's a Jew in a prison or in a Wall Street office, the Rebbe is there to help all Jews.

Help a Jew in prison and press the Donate button now.